DC used to do a TON of "Imaginary Stories," where the heroes were remixed, changed, or outright killed by the last page.

If you ask me, there's more wallop and emotional punch in an imaginary story from the '60s than a "canonical" one today. The stakes in those 20 or so pages are actually real to the story itself, rather than the disingenuous deaths and alterations of today's superhero comics.

And Cary Bates (as well as other Bronze Age writer Elliot S! Maggin), brought a punch to the Superman stories that weren't there before. They were darker, with a deeper dive into character pathos than the classic Weisinger era stories.

"Even A Superman Dies!" is announced by a cover of a one million year old Superman dying on a futuristic operating table. The robot doctor announces "...In minutes he'll turn to dust!" 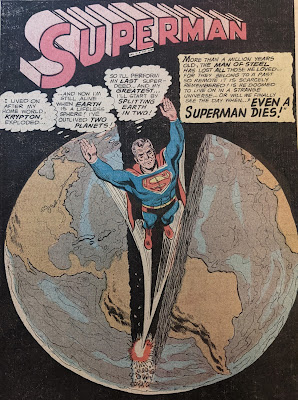 The splash is no less bombastic, as an aged Superman who has "outlived two planets" makes his last super-deed splitting the dead Earth in two in the year 801,970! All thanks to a devious plan by the Time-Trapper, Superman's 1970 trip to the 30th century aged him in real time. To make matters worse, the Trapper curses Superman to ONLY move forward in time, where he arrives to find Earth "used up" from all the pollution and war.

Superman's solution? He cleaves the Earth in half to expose the vibrant minerals at its core and, like a God, creates a New Earth. Resigned to "an eternity of boredom!", Superman does not notice a small drone until it zaps him through the chest.

The drone? A construct of the aging Lex Luthor of the past, who channels his "Evil Psyche-Force" into it upon his death, sending it on a centuries-long hunt for Superman--and collecting more "Psyche-Force" of killers and evildoers on its way to find the Man of Steel. It's the coincidental plotting of an old superhero comic, eschewing relative believability so it can shift the characters forward along their narrative ark.

In this case, it's Superman surviving against his wishes and making a suicide run towards a comet. A suicide run. Superman gives up and simply wants to die. 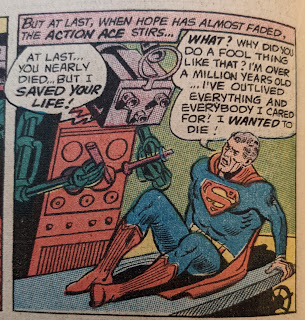 He relives his own life with momentary flashes of self-awareness, ultimately awakening on that fateful day in 1970, but saved from the missing Time-Bubble that started it all.

What's the point of Bates's not really imaginary Superman story? A chance, I think, to show how much it would take for Superman to finally give up: the body of a million-year old superhero and the loss of everything he ever loved. Creating a new planet from the ashes of Earth isn't enough, his hope extinguished.

So what, I ask, does this say about Superman and what he needs to live for? And how could the memories of that experience inform Superman moving forward, back in the present day? If "Even a Superman dies!" came out today, it would result in years of character reflection and a new determination to steer humanity away from the pollution that will ultimately leave the Earth inhabitable. If that were to happen, would Superman find himself bordering towards fascism?

But I think there's more power to be had in these 15.5 pages--pages that leave us to ask and ponder the questions ourselves.