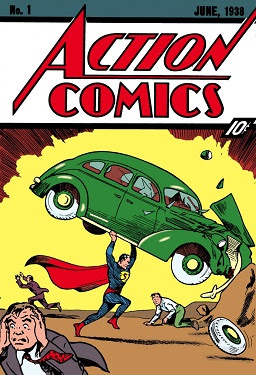 This is where it starts: the first appearance of Superman in comic book form, reworked from a failed comic strip pitch by Jerry Siegel and Joe Shuster.

One of the students in my Comic Book History class had a great point: "If Superman was new, and the superhero was new, what's to keep anyone looking at the cover to think he was some dick destroying someone else's car?"

The Superman in this first story is not entirely like the established hero we all know, the one who works within the boundaries of polite society and the law. He's not a superhero (the term hadn't been invented yet: the proto monniker "Mystery Man" was probably already bandied about) and he's not a symbol of American obedience.

He's hot-headed, reckless, and works outside the bounds of the law. He's a social crusader--not posing for photo ops or standing out with a bullhorn--but fighting injustice when he has to, whether it's a man abusing his wife or a politician abusing his power. 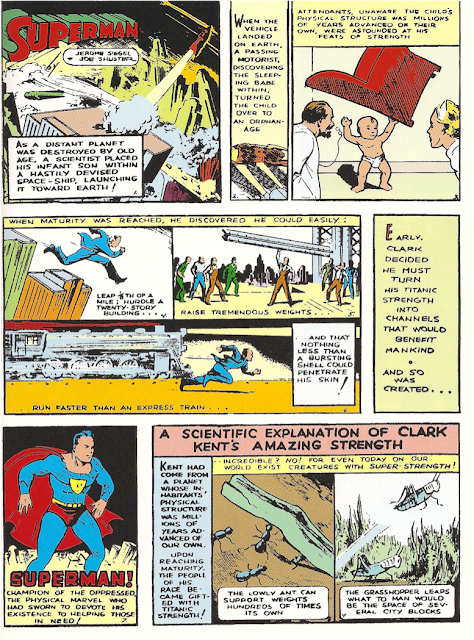 His origin is tacked on, right at the start of his first adventure. His home planet isn't Krypton (yet), but an unnamed "distant planet destroyed by old age"; the Kents aren't introduced, but instead a "passing motorist" finds the "sleeping baby" and takes him to an orphanage. At this point, "Clark" must have grown up at the orphanage, and come into his powers to leap, lift tremendous weights, and "run faster than an express train."

The story moves like an express train: Superman lands a woman on the grass outside the Governor's mansion, breaks through a steel door and pesky butler, braves bullets, and gets a last-minute pardon for a woman about to get electrocuted. All in two and a half pages.

The next day, in his guise of Clark Kent (he's only referred to as "Clark" in the first page, then Kent throughout--except for Lois, who calls him "Clark") reports to work at the Daily Star, follows a tip of a wife beater, busts in, and beats the crap out of the abusive husband--who promptly passes out at the thought of fighting Superman mano y mano.

Lois Lane goes out with Clark out of a feeling of obligation, and then scolds him for being such a pantywaist. When a large man tries to cut in, Clark refuses to fight him, leaving Lois to slap the man and storm off. As Superman, he saves her when the alleged mobster forces her off the road and kidnaps her, by lifting the car and shaking them all out.

The meeting of Lois and Superman, rendered in Shuster's competent line (the stippling through Action #1, originally intended for black and white reproduction in newspapers, casts a Depression-era mood through the short story), is the crux of Superman's story. 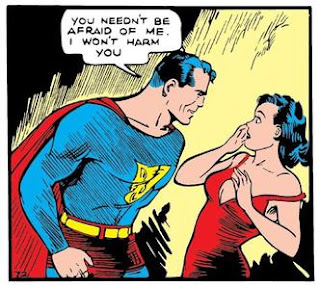 Dan Jurgens pointed out that Superman can not function without Lois: she's just as much a part of his story, especially having been there from day one. Throughout the whole breakneck story, this one panel stands out more than any other. Not Superman lifting the car over his head, or even interrogating a crooked lobbyist for a foreign power.