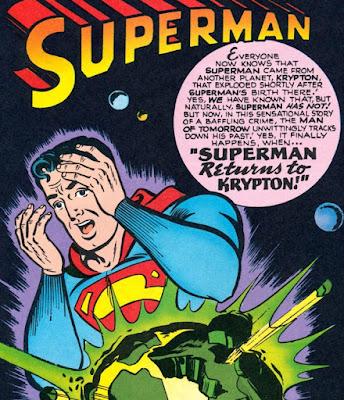 In the comics, Superman was unaware of his own origins until writer Bill Finger and artist Al Plastino crafted "Superman Returns to Krypton" in 1949's Superman #61. Finger, most known for co-creating (or, according to many accounts, creating) Batman, Wildcat, and Green Lantern, was arguably the greatest writer of superhero detective stories of the Golden Age of comics.

That's what "Superman Returns to Krypton" is: a detective story without the levels of sentiment and pathos that would later come in co-creator Jerry Siegel's return to the Man of Steel.

When Lois Lane goes undercover to expose a fake swami, Superman swoops in for the rescue and is stopped in his tracks when Swami Riva "hexes" him, and he is left weak and knocked out. The Swami succeeds again the next time, but Superman discovers something: his strength and vigor return when he's away from the turbaned villain.

And so, Superman begins tracking down Riva's past, learning he was a carnival con man who purchased a "big rock" as part of his turbaned fake Swami gag (nowadays known as: cultural appropriation!). After Superman encounters a similar but weaker green rock, he realizes that is his source of weakness, and finds the site of its crash. He follows the trajectory backwards through time to discover a green planet "far outside Earth's solar system." Because he's from a different time, Superman is a phantom unable to do more than eavesdrop on the citizens of this past planet.

A hunch urges Superman to follow a man who "looks more like me than I do myself!" back to his home, only to witness Jor-El telling his wife (holding a swaddled infant with spitcurl) about the council's disbelief their planet's Uranium core is about to explode. As the planet begins to collapse, Superman flies after the rocket bearing the infant, only to find it land on Earth after a long journey, discovered by an old couple.

"That old couple...They're my FOSTER PARENTS!" Superman realizes, now fully aware that he comes from the planet called Krypton.

After Superman returns to his time and destroys the two pieces of Kryptonite, he stands atop a mountain, his final thoughts with the possibility of more Kryptonite and less on witnessing the death of his people.