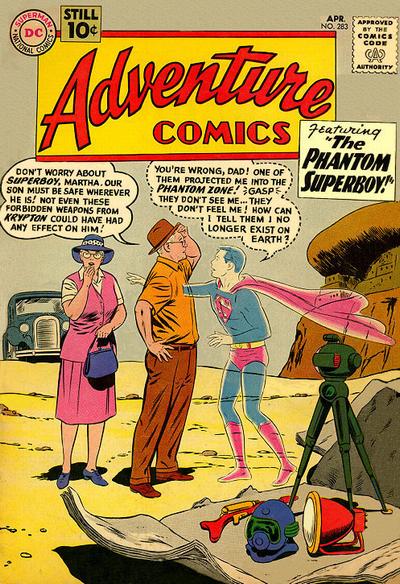 Writer: Robert Bernstein
Pencils: George Papp
Inks: Stan Kaye
I love the Weisinger era, when tyrannical editor Mort Weisinger lorded over all the Superman books and managed to oversee some of Superman's most mythological stories. The stakes in a story from this period are usually not so much cosmic or destructive as social--the biggest threat is often rejection by friends or society.
Clark helps Dad Kent unpack his new shipment of stock for his general store, including an electric typewriter, which he then demonstrates to Lana Lang--keenly noting that all functions are done through that miracle of electricity. He then gives Lana a lift in the Kents' station wagon and asks about her professor father, which then cuts to Professor Lang's New Mexico dig, where the unexpected happens.
A large green box drops from the sky, right by them! Impossible to open, it happens to have a note in Kryptonese, which Superboy later translates when the box is brought to Smallville. 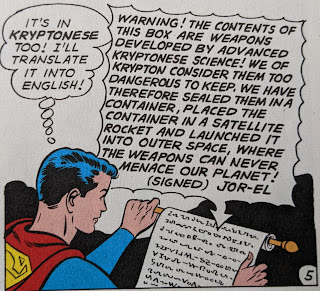 Heaping the coincidences up (another Weisinger era staple), the box of advanced weapons were sent out to space by Jor-El himself. So, what's the Boy of Steel do?
He cracks that crate open and tries out each and every weapon. When he comes to a small projector and its accompanying "thought helmet," he learns of the Phantom Zone (the dimension that traps criminals into becoming intangible phantoms) and its most notorious criminals, including General Zod, who planned a takeover of Krypton through an army of Bizarro duplicates of himself (the ultimate in narcissism).

The story ends up with Superboy turned into a phantom himself, through the vengeance of a tiny lizard (long story), and faced with the prospect of living life unable to even be acknowledged.
He gets free through a plot device/gimmick that was used in the Superman Vs. Atom Man serial, but it isn't clear if he really learned his lesson at the end or not.
As for Zod, however, it really wouldn't prove the last Superman fans would hear from him. 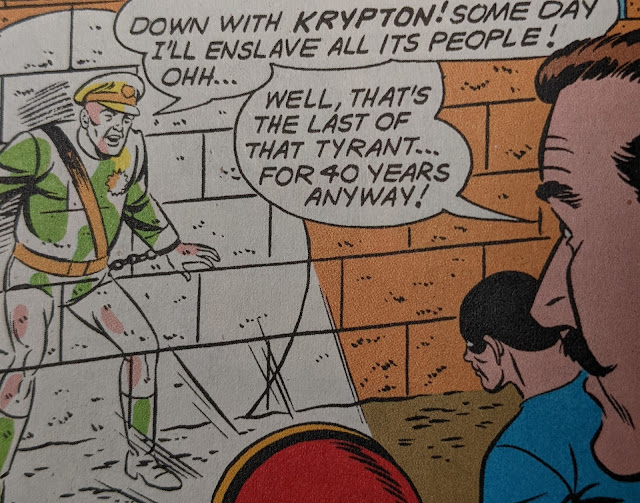